The following is a sample of recent and upcoming work by faculty.

Johnson’s feel for the rhythms of reconnection are steady, and she and her fine actors make RETURN one of only a handful of films to honestly address what to many is heartbreaking reality. 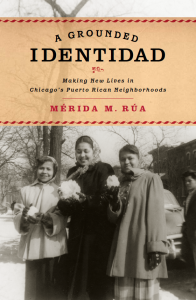 Chicago is home to the third-largest concentration of Puerto Ricans in the United States, but scholarship on the city rarely accounts for their presence. This book is part of an effort to include Puerto Ricans in Chicago’s history. Rúa traces Puerto Ricans’ construction of identity in a narrative that begins in 1945, when a small group of University of Puerto Rico graduates earned scholarships to attend the University of Chicago and a private employment agency recruited Puerto Rican domestics and foundry workers. They arrived from an island colony where they had held U.S. citizenship and where most thought of themselves as “white.” But in Chicago, Puerto Ricans were considered “colored” and their citizenship was second class. They seemed to share few of the rights other Chicagoans took for granted. In her analysis of the following six decades–during which Chicago witnessed urban renewal, loss of neighborhoods, emergence of multiracial coalitions, waves of protest movements, and everyday commemorations of death and life–Rúa explores the ways in which Puerto Ricans have negotiated their identity as Puerto Ricans, Latinos, and U.S. citizens.

Through a variety of sources, including oral history interviews, ethnographic observation, archival research, and textual criticism, A Grounded Identidad attempts to redress this oversight of traditional scholarship on Chicago by presenting not only Puerto Ricans’ reconstitution from colonial subjects to second-class citizens, but also by examining the implications of this political reality on the ways in which Puerto Ricans have been racially imagined and positioned in comparison to blacks, whites, and Mexicans over time. 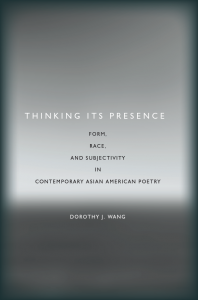 Can minority poetry contribute meaningfully to American poetry and poetics? Dorothy J. Wang makes an impassioned case that indeed it can, while taking pains to point out that such a claim does not square with the status quo. Poetry by racialized persons, she notes, is almost always read as secondary to the larger (and more “primary”) fields of English-language poetry and poetics. Thinking Its Presence calls for a radical rethinking of how American poetry is being read today.

While focusing on the work of five contemporary Asian American poets—Li-Young Lee, Marilyn Chin, John Yau, Mei-mei Berssenbrugge, and Pamela Lu—the book makes the larger case that aesthetic forms are inseparable from social, political, and historical contexts when it comes to the writing and reception of poetry. Wang questions the tendency of critics and academics alike to occlude the role of race in their discussions of the American poetic tradition and casts a harsh light on the double standard they apply in reading poems by poets who are racial minorities.

This is the first sustained and detailed study of the formal properties in Asian American poetry across a range of aesthetic styles, from traditional lyric to avant-garde. With passion and conviction, Wang argues effectively that critics should read minority poetry with the same attention to language and form that they bring to their analyses of writing by white poets.